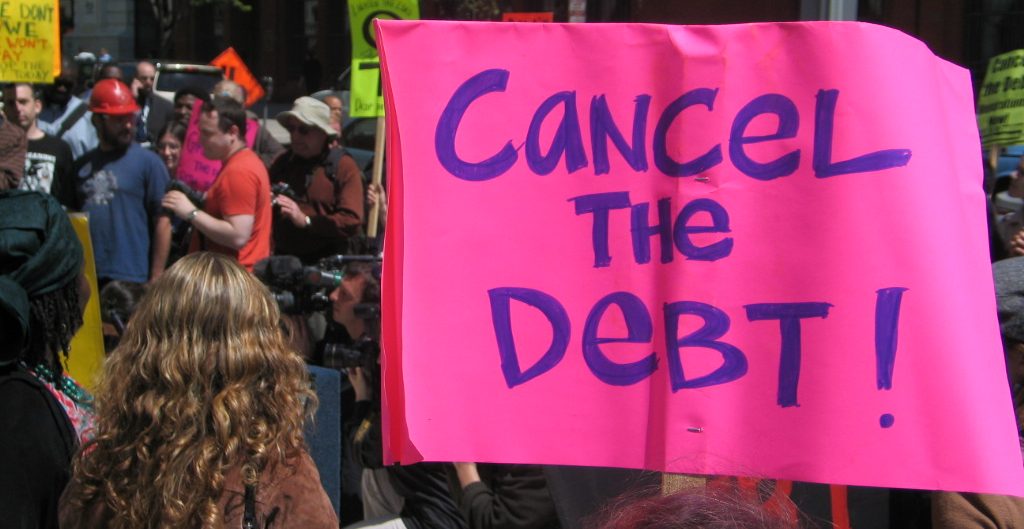 In one of the great ironies of our times, Joe Biden, who did more than any other politician to make it harder for individuals to escape their credit card debts and student loans, is likely to discharge a significant chunk of education debt once he takes office in January.  The “compromise and settlement” provision of the Higher Education Act empowers the president to take this action without Congressional approval.  It won’t be a full debt jubilee, covering the entire bill due for federal loans, and, if the deficit hawks have their way, it may be limited to the lowball sum of $10,000 included in the HEROES bill passed by the Democrat-controlled House.  That will not be nearly enough to make a dent in the racial wealth gap for which student debt is a well-documented magnifier.  Nor will $10,000 provide much in the way of a general economic stimulus, which has emerged as the main rationale within the political class for debt relief.  This measure is only under serious consideration because it will free up a portion of household budgets hit hard by the coronavirus recession, but full debt cancellation is the right thing to do, for sound ethical reasons.

Even if a limited jubilee comes to pass, we cannot allow debt relief to stand alone.  The day after the executive order comes into effect, the numbers will start rising again.  Without the passage of a strong version of College for All legislation aimed at delivering tuition-free education, we will not have altered the status quo.

College for All will face an epic Congressional fight, but it has become a mainstream issue in the relatively short period since Occupy Wall Street when it emerged as a righteous demand, promoted by the Occupy Student Debt Campaign, followed by Strike Debt and the Debt Collective, which secured more than a billion dollars of debt relief for students of predatory for-profit colleges by organizing a debt strike.  Its elevation to the forefront of public policy proves that grassroots activism can win successes, but only if the timing is right and if the issues are genuinely popular (which parent would not want their child to attend a good, tuition-free college?)

We are in a watershed moment when establishing free K-16 as a right is edging out the utilitarian view of college as a vehicle for generating profit or returns on investment.  But if the goal is to convert a U.S. college education from being a grubby transactional asset into a full-blown public good, how can College for All take on board the demand of reparations (proposed by groups like Scholars for Social Justice) for stolen land, liberty, and labor?  Recent Duke University and UCLA conferences hosted ambitious agendas for addressing past harms such as racialized exclusion or theft of Indigenous land for the purpose of constructing colleges.

Are blueprints for re-financing higher education adequate if they fail to include the unsettled claims from land dispossession, or the ongoing legacy of slavery, Jim Crow, and mass incarceration?  Education is not the only sector where the state and taxpayers should be asked to meet these unsettled obligations (housing is obviously high on the list), but academics, with their stake in university governance and their capacity to influence policy, are well-placed to ensure that these issues are thoroughly aired and that adequate steps are taken to address them.  Some colleges have begun to acknowledge the claims related to their own histories, making reparations for their past involvement in slavery, but federal action, with the stamp of the settler state on it, would be more meaningful, and consequential.

College for All is viewed by many as an opportunity to restore the low-cost heyday of public universities before state and federal governments began to welch on their funding commitments.  This is a laudable aspiration, but only if we acknowledge that, overwhelmingly, the beneficiaries of quality public education during these glory days were America’s most normative, white citizens.  Is there a will to compensate those who were excluded, for their lost opportunities?  And in what form could this be effectively proposed?

Both the Movement for Black Lives (as the first plank of its reparations platform) and Red Nation (as part of the Red Deal) have selected full debt cancellation and tuition-free college as primary principles.  Yet the meaningful realization of these demands is dependent, as it should be, on universities repairing past colonial harms while severing their ties with, and investments in, mass incarceration, borderland detention, climate injustice, and militarist occupation.

The right to access a college education—central to the civil rights agenda—has morphed over the decades into the right to access education loans.  The outcome is a radically unequal toll on Black, Latinx and Indigenous households because they hold just a fraction of the wealth of white households.  Four years after graduating, the average loan balances of Black student debtors are more than double that of their white counterparts, due to the legacy of employment discrimination and differentials in intergenerational wealth.

Cancellation of existing debt and tuition-free college might narrow that gap, but closing it will require corrective attention to the root historical causes.  Can academics help by thinking about how education can function as a reparative public good?  If College for All can be pushed in that decolonial direction, it will transform American society more than the GI Bill did.

Andrew Ross is the secretary of NYU-AAUP, a founding member of the Occupy Student Debt Campaign, Strike Debt, and the Debt Collective, and the author, among many other books, of Creditocracy and The Case for Debt Refusal.